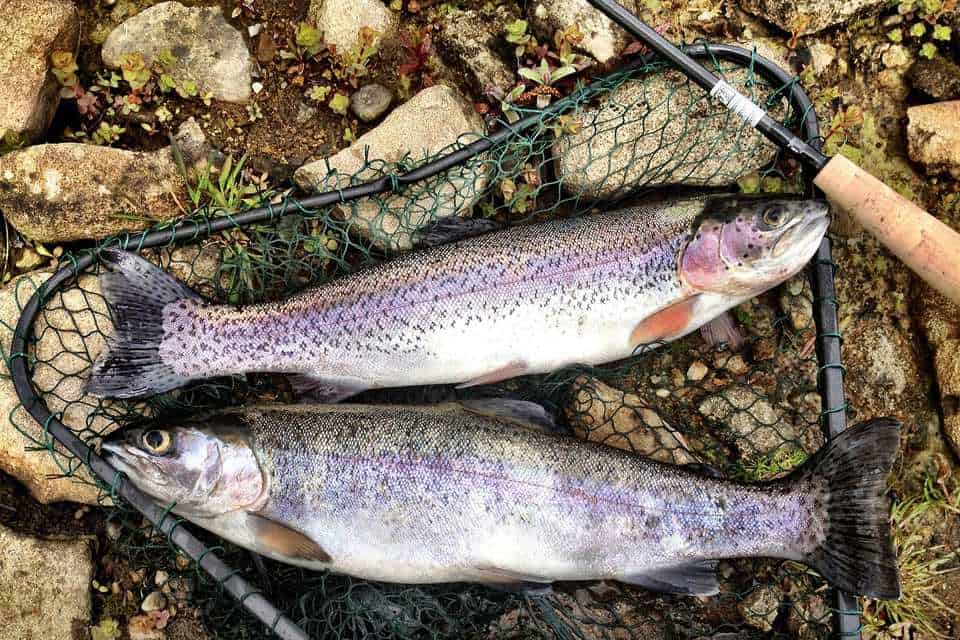 Although there are numerous species of trout, anglers usually go for the 3 most popular ones: Rainbow Trout, Brown Trout, and Brook Trout.

Understanding the behavior of each species and advancing your techniques to keep up can really enhance the chances of getting more catches.

And if that’s what you’re looking for, this guide will provide you with all the information and tips you need.

Although trout have larger mouths, they consumer smaller food such as tiny bait fish, larvae, insects, as well as plankton.

I found that the smaller the diameter of my fishing hooks, the more successful my hook sets were.

It’s also worth mentioning that trout generally have more fragile mouths, so using smaller hooks and keeping them firm but not strong will ensure that no damage is inflicted on the mouths of your catches.

Even more important than the smaller hook sizes are the barbless ones.

You can either go for barbless hooks or use a pair of pliers to pinch down the soft metal barbs. The latter would be the more economical option.

Despite the fact that barbs ensure that the fish will remain hooked, it does cause considerable damage when you’re unhooking it.

And I know that losing your catch without the barbs might be a concern for you. That’s why I recommend keeping the line very tight throughout the whole battle against the fish.

The line slacking is the perfect opportunity for the trout to spit the hook, so you shouldn’t give it that chance.

There’s no fishing guide that won’t include this particular tip.

Actually, whatever your prey is, getting a lure that imitates what it feeds on is the most effective way to maximize your catches.

If you’re unsure about what lure to use for the species you’re after, I’ve made a whole section for that a little down below.

4. Experiment with Lures to Find the Proper One

Although it’s common knowledge that specific species go for certain types of lure, you can still experiment with various types when you’re fishing on a large reservoir.

So for example, if you’re fishing for Rainbow trout, have a spoon on one line, a spinner on another, and a plug on the third.

Whatever the hook that gets bites should be your choice for the day.

5. Go for Live Bait If Allowed

Live bait can be as effective as fly fishing for catching moving trout.

Small minnows, worms, wax worms, smelt, grasshoppers, and meal-worms can all be great if you’re fishing for Rainbow trout.

6. Research Water in Your Area

Asking local fisheries biologists is one of the most helpful ways that you can use to increase your catches.

After all, these professionals are the ones that stock rivers and lakes with fish, set the daily fishing limits, and manage fish populations.

Doing some online research can also help you find the best bait and tackle shops. There, you can ask for tips on which bait to use and where to find your catches.

7. Understand where to Find Trout

Generally, trout are found in cold water. Be it a river, lake, stream, or pond.

And because they’re accessible wildlife food, you’ll definitely find them in the woods where bears, bobcats, and other animals fish for food.

In deeper lakes, you can find trout of larger sizes and evidently tougher battles. They’ll usually be feeding on smaller fish in the depths of lakes –especially during the salmon spawn.

Different Types of Trout, Their Locations, and How to Catch Them

Similar to mahi-mahi fish, rainbow trout take to the sky as soon as they’re hooked.

It’s quite common to see them jumping into the air while they’re attached to your line.

So fly fishing is the way to go with rainbow trout.

Smaller brown trout prefer water with slow currents. The bigger they get, the slower they prefer the current. So, you’ll find bigger ones around boulders or cut-banks.

This particular species of trout are smart and can even learn from the past, which means you should always plan to outsmart them.

The best time to fish for them is around dusk and when it’s getting darker as this is when they leave their hideouts and roam the water to feed.

Brook trout go for pools and inner bends of streams. You’ll likely find them in clear, cool, and well-oxygenated creeks.

They’re not the smartest in the bunch, but they’re pretty stubborn and will put up a fight, so keep your line tight.

Lake trout like to swim around the edge banks right after the ice has melted out or around the late fall. Otherwise, you’ll find them at the bottom of lakes.

Use soft-bodied aquatic invertebrates such as flies, mayflies, stone-flies, caddisflies, dragonflies, and mollusks.

Using baits such as blood-worms, meal-worms, shrimp, and insects can prove quite effective.

Golden trout will likely be swimming in the high sierras and in the Upper Kern River system.

You can also find them in streams or other waterways as they tend to hybridize with rainbow trout.

However, you’ll need to bring your best bait as they’re quite picky eaters.

They usually go for chironomids (midges), so luring them with flies and similar tackle wouldn’t be quite difficult.

From northern California to Alaska and along the coast and east into some states like Colorado and Montana, cutthroat trout like small rivers, lakes, and gravel-bottom creeks.

Look for cutthroat trout around quiet eddies and behind snags. This is because –like brook trout- they prefer being around quiet current tongues, under rock ledges, and along undercut banks.

You can easily fool them with big, bushy flies. Adding tinsel can go a long way too.

Be prepared for a fight, however, as cutthroats are quite stubborn and as fierce as their name implies. And some patience if you’re fishing for them in the morning.

You can find them in the Arctic Pacific and east of Alaska. They’re also found north of Oregon up through British Columbia.