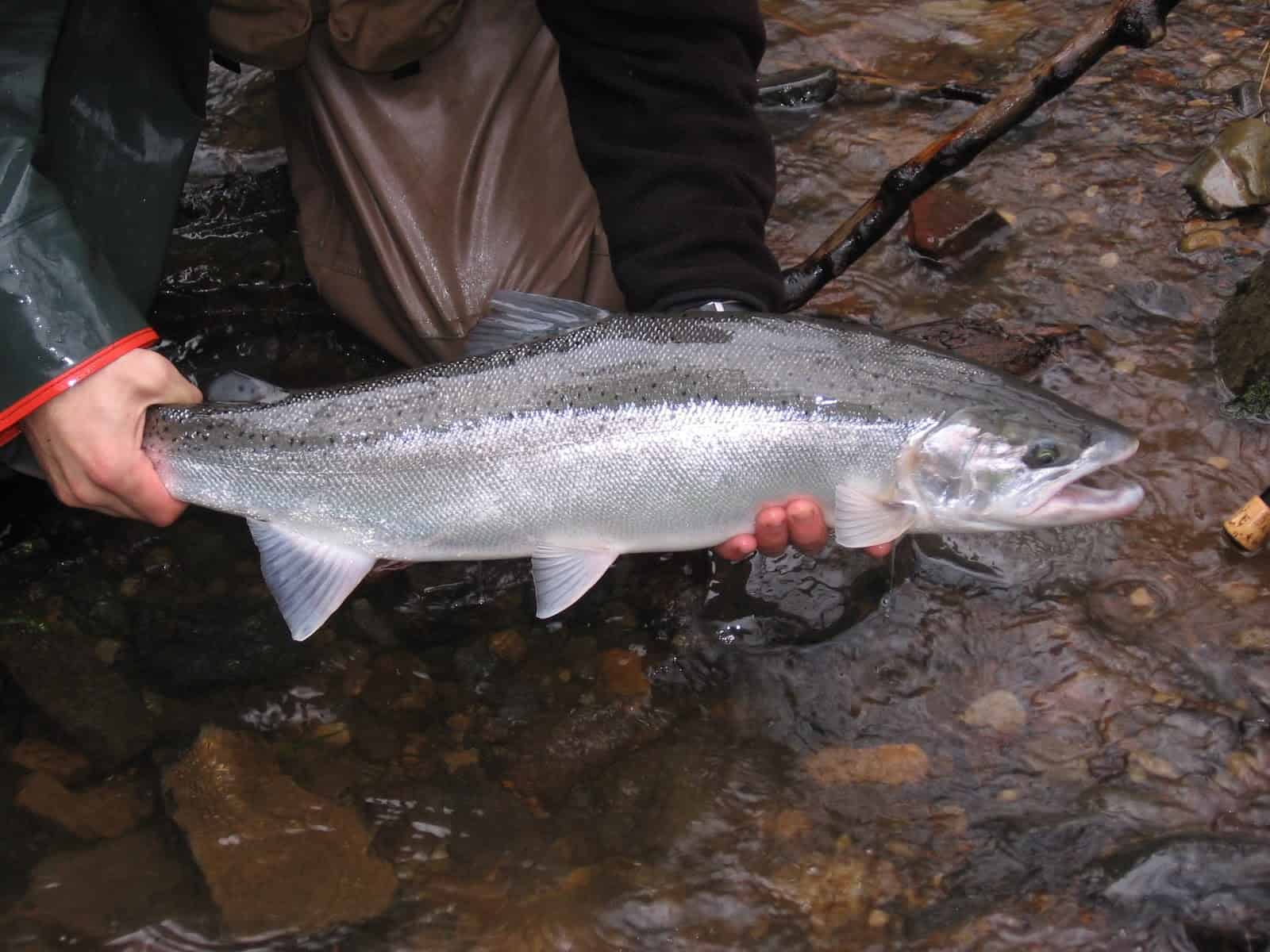 Fishing for steelhead can be challenging and frustrating, especially if you’re trying to catch some bigger ones, but hey, don’t give up just yet.

If you use the right bait and have some patience, coupled with a few tips and tricks, you’ll be able to catch those resistive steelhead fish so easily that it’ll turn into a daily routine. Let’s get started!

Before we talk about the best techniques to catch steelhead, we need to help you select the right bait first. There’s no use of making an effort to catch steelhead fish if it doesn’t bite the bait. It’s worth noting that the best bait choice varies according to the weather conditions. Here are some popular options to choose from:

Nightcrawlers are most effective for catching steelhead right after a storm or if there’s a sharp drop in water levels. You can easily get yourself some free nightcrawler bait if you have a garden.

Shrimp would be a perfect steelhead bait at low temperatures. Make sure to buy the real ones instead of those “plastic” shrimp baits. They’re more expensive, but their scent is much more powerful, and you’ll be able to catch a lot of steelhead fish in no time.

Shiners and minnows are steelhead’s favorite food. You can either use live bait or dead bait, but make sure to follow the regulations for the water you’re fishing on since it can be illegal to use live bait.

Regular bait may not be allowed in your region, which is why ez eggs can be a suitable replacement. They’re artificial and have a soft feeling so that when the fish bite them, they don’t notice that it’s fake, so they don’t spit it out.

Even if you have regular bait and it’s allowed in the system, it’s always a good idea to have some ez eggs in your arsenal. They’re more buoyant, and you can add a natural scent to them to make them more realistic.

Hot shots are an easy way to turn steelhead trouts into strike mode. You can even catch bigger steelhead fish using hotshots because they are more territorial than the smaller ones and tend to attach more aggressively. Try them out once, and you’ll find yourself using them daily because of how consistent they are.

2. The Bobber and Bait Method

This technique is a good choice for beginners, as it’s quite simple to implement. Even kids can learn how to do it. All you have to do is to use a weighted bait (or jig) below a floating bobber; then, you need to set the hook the exact moment the bobber dives or stops.

The idea here is to make use of the current drifting to help you scan a more significant area of the waters. Use a weight to keep the bait under the surface of the water and let it drift with the current at the same speed.

This technique can be hard to learn, so it’d be better to take it slow and start experimenting with some easier techniques first. The technique is highly effective, which’s why it’s one of the favorites of many anglers despite being relatively hard.

The spinners technique is very similar to the conventional cast and retrieve method, with the “retrieve” part being replaced with “swing.” Instead, you let the spinner drift normally in the current then swing right to the bank.

One less common steelhead fishing tactic is spoon fishing. This method works best for bank fishing during wintertime because winter steelheads are more lethargic, so it’s pretty easy to catch their attention with a shiny spoon.

However, that doesn’t mean that you can’t use this technique during summertime too. If you use a heavy hook, choose a spoon with a long rod to support it.

Fast-moving water can be too cold for steelhead trouts, so they tend to avoid it and gather in warmer, slow-moving waters. If you could spot one of these “warm-up pools,” you’ll certainly find a considerable amount of steelhead fish to catch. Look for the wide parts of the rivers because the water flow rate is slower at these parts.

Steelheads are heavy, and they bite somewhat aggressively, leaving your hook more prone to breakage. You need to use extra sharp hooks to make sure that they don’t slip out of the fish’s mouths. Don’t bother sharpening your hooks as this won’t be very effective. Just make it a habit to get some new hooks every now and then.

Plunking is a super fun way to catch steelhead fish, and you should absolutely give it a shot.

This technique is often used in anchored boats, but you can also do it from the banks. Use a sinker to position your line as low as possible in the current, in addition to a lure above the sinker.

This allows the lure to roam unobstructed in the current. While it’s true that the rig maintains its position, the movement of the lure will undoubtedly catch the attention of steelhead fish.

Fly fishing can take a while for you to master, but it’s definitely a very effective tactic for catching steelheads. You can either use single or double-handed rods according to your preference. Now all you have to do is to swing the flies through the current, and you’ll catch a ton of steelhead fish.

Before you go ice fishing for steelhead, you need to pick the right timing. Wait for the rivers to be in good shape and the temperature to be hovering somewhere above the freezing point.

It’s also a good idea to wait for the first few hours after a high tide since that’s when large groups of steelhead fish migrate from the ocean.

As for bait, artificial eggs or pink worms are generally preferable for steelhead ice fishing. It’s necessary that you maintain a straight line between the rod tip and the float without hindering the free float, then all you have to do is to use the drift fishing technique that we’ve talked about earlier.

Now that we’ve covered everything from bait choices to fishing times and some of the widely used techniques, it’s time to apply what we’ve learned today.

Remember that the whole thing requires a bit of a trial and error approach until you find out what works best with you. Many anglers can get really good at specific techniques because it just suits their fishing style, while other methods may just make them less efficient.