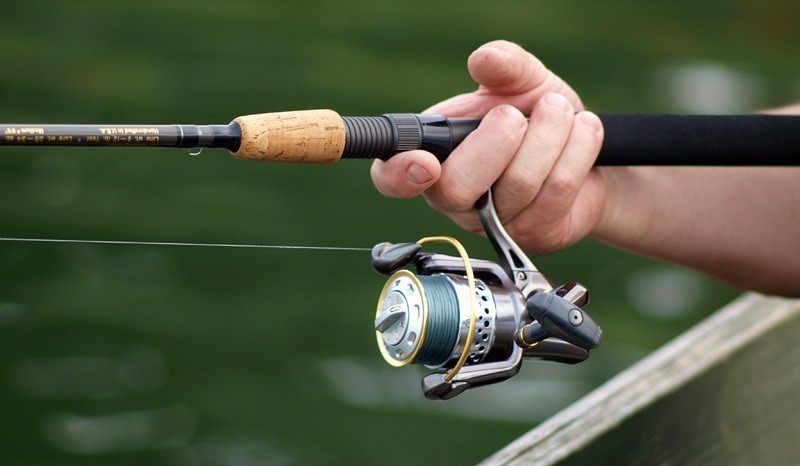 Good performance requires that you own reliable equipment, and that’s why despite how talented an experienced you are at fishing, you need a good spinning reel.

A spinning reel is comprised of 8 parts: the body, the anti-reverse switch, the foot, the handle, the line spool, the spool release, the bail, the line roller, and the drag adjustment.

Each of these parts performs a job and is related to a certain feature. Let’s check these features out and find out what you should look for when you’re trying to choose a spinning reel.

This also related to the size of the fishing line you’ll use, and the lighter the line, the smaller the reel should be.

So if the average line strength you need is 8 pounds, go for a medium-sized reel that’s rated for 6,8, and 10 pounds.

If a reel states a “6 LB/ 90 YDS” rating, then that would be the average. This line is suited for lines weighing between 4 and 8 pounds.

The 3 sizes you’ll find are:

You can use them to catch smaller fish like bass, flathead, and bream. They’re also more suitable for light fishing in rivers, harbors, and lakes.

You can use them to catch Samson, Mulloway, Kingfish, Australian Salmon, Tuna, and Trout.

2. The Body and Weight of the Reel

The body or the housing of the reel can be made of either graphite or aluminum. Sometimes it can be a combination of both.

Aluminum bodies are evidently stronger and don’t flex as much as graphite ones.

On the other hand, graphite bodies are much lighter, so it’s more suitable for an angler that spends an extended period of time.

Moreover, if you’re going to be fishing in freshwater, an aluminum body would suit you well.

However, saltwater requires a graphite reel as an aluminum one would be less prone to corrosion.

Double-check that your reel’s mechanical parts move smoothly with no back play and that it doesn’t have any loose parts.

A spinning reel has a fixed reel where the line is wrapped onto the spool with the help of the bail as you turn the handle.

The gear ratio indicates how many times the bail rotates around the spool with each turn of the handle.

For one turn of the handle, the bail on a reel with a 4:1 gear ratio would rotate 4 times around the spool.

A 4:1 would be considered a slow-speed reel as it doesn’t collect that much line with each crank.

This gives it the advantage of extra torque to handle bigger fish. That’s why a 6:1 high-speed gear would be better for medium to small-sized fish.

If you’ve don’t have the budget to buy multiple reels with different gear ratios, you can go for a medium-speed 5:1 gear ratio.

The drag system on a spinning reel is one of the most important features. It’s the part responsible for applying pressure on a fish when it’s hooked as well as releasing the line during a fight against the catch.

It also has an impact on how often your line would break, so make sure you get a reel with a high-quality drag system and smooth performance.

Generally, there are 2 types of drag systems: a front drag and a rear one. They differ in their location and their styles. Front-drag systems come with multiple large drag washers to make your reel more durable and enhance its performance.

On the other hand, rear-drag controls make your fights easier as they’re more accessible. However, they’re not suitable for fighting larger or more stubborn fish.

5. The Ball Bearings of the Reel

The ball bearings or bushings are placed within the body of the reel to provide it with smoothness, support, and stability.

A rule of thumb is that the more bearings found on a reel, the smoother its performance will be. And generally, 4 is the minimum number.

Getting a reel with sealed stainless steel bearings is better for the extra durability and ability to fish in saltwater without it corroding.

When it comes to the ball bearings, you shouldn’t concern yourself with the budget as the smoothness will have a huge impact on your fishing experience.

6. The Spool of the Reel

The spools on the reel The reel’s spool has 3 important functions: controlling the casting distance, providing smoothness, and holding the line.

There are 2 types of spools: internal or skirted. Internal spools are a bit out-dated and they can get entangled within the body of the reel.

On the other hand, skirted spools work smoother and with less probability of entanglement.

Moreover, there’s a variation of the skirted spool known as “long cast” whose design makes it a lot more functional.

It’s longer and shallower, so it minimizes the friction of the line and enables you to cast for longer distances. You can go for a Mag spool to benefit from its long castability.

Mag spoils are wider and flatter than regular ones -a design that makes its casts longer and its retrieves faster.

On top of that, the design works on reducing lone twists and maximizing the line pickup with each handle crank.

This ensures that your hook sets are solid and precise. The larger the arms and knobs on a reel, the faster the handle would be and the firmer your grip on it would be.

Spinning reels are the most popular types of reels (compared to spin cast or baitcasting reels). Their open-faced design makes them more accurate and quite easy to use.

Moreover, their versatility allows you to add a good amount of line and some even come with an extra spool for easier line changes.

The only problem with them is that they can’t handle heavier weights of lines, so the fish you catch with them will probably be not that big.