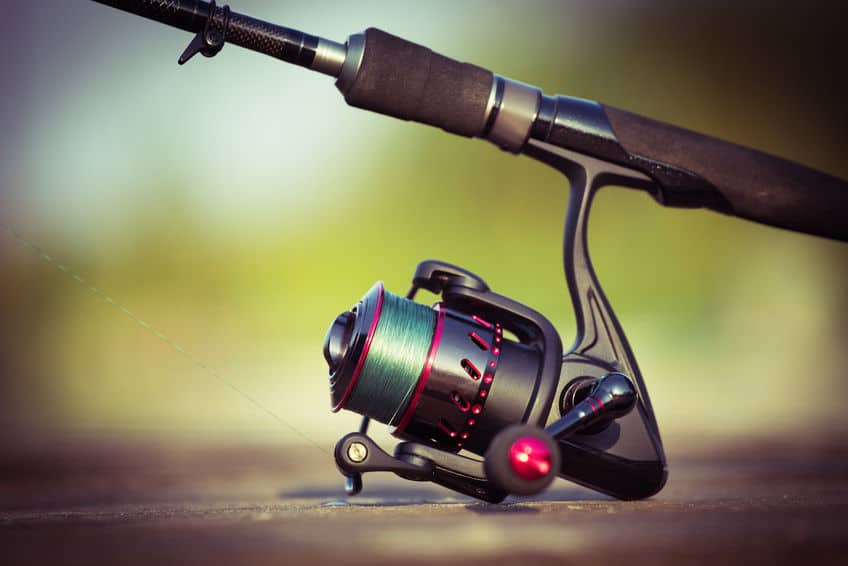 ​The spinning reel got its name because of the rotating bail wires and bail arms that go around the spool.

A spinning reel is made up of 8 main parts: the foot, the handle, the body, the anti-reverse switch, the bail, the spool release, the line spool, the drag adjustment, and the line roller.

​Each of them is an important part that performs a certain function. And if you want to have an in-depth background regarding the job of each part, here’s an overview.

A spool is a cylindrical object where the line is wounded around to allow the line to be cast and retrieved.

The spool itself does not spin around but it moves up and down along the reel to allow the line to be rewind back on itself evenly.

This allows the line to spool from bottom to top and from top to bottom so it doesn’t bunch up and down.

If the spinning reel lacked this feature the line would bunch up in the top, bottom or at the middle of the spool. Those bunches can build up to a point where it would make it very hard for the rotor arm and the bail wire to circle around the spool.

A very obvious component of the spinning reel is the bail arm. It is a wire contraption that is bent across the top of the spool.

Its function is to help manage the line. When the bail is in a closed position the line does not pull and you can retrieve it.

If you want to cast the line you hold the line near the fishing rod itself by one finger, and flip the bail arm in the other direction allowing for the line to be cast.

You then jerk the fishing rod in the direction you want the line to go and release your finger from over the line and watch the line fly towards the water.

Another distinct feature of the spinning wheel is a handle-like object designed like a long neck which is called reel foot.

The reason it is designed like a long neck is because it hangs underneath the fishing rod connecting both the rod and the reel together, allowing enough space for the bail to spin while casting or retrieving your line in a way that doesn’t interfere with your fingers or the fishing rod itself.

Likewise for the handle found on the side of the reel, designed to be long enough to leave adequate room between the spinning reel and your hands.

One of the features of the spinning reel that it’s both right and left-handed friendly.

Also, the screws on the handle can be helpful when storing the reel, since the handle is too long it might hook on stuff around, essentially damaging the handle.

You just loosen the screw on the reel until you feel the hinge loosening up, then press on the handle itself to fold it or stick it near the body of the spool and re-tighten the screw again.

Another feature on the spinning reel is a button called the anti-reverse.

While it’s on the on position you can only crank your handle in one direction, either to cast your line or retrieve it and the mode of switching directions is just by flipping the bail arm from one direction to the other.

When you switch the anti-reverse button to the off position you can crank your handle in both directions to cast or retrieve.

The anti-reverse button is more friendly to beginners since disabling it shuts of the gearing system in the reel, basically putting the reel on manual mode.

This means that when you cast your line and it’s pulled it would keep going until you start retrieving. So inexperienced users may lose line if it’s pulled and they are unaware.

Adding drag makes it harder to pull off the reel,  and vice versa.